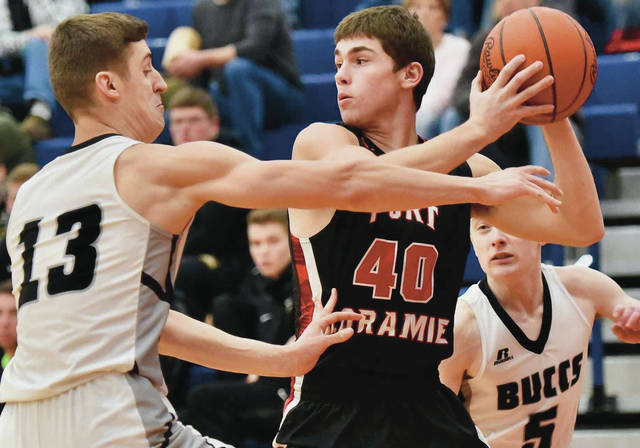 PIQUA — Fort Loramie has won sectional titles the last three years and is looking for its fourth this year. The Redskins had no problems taking their first step toward that goal in a Division IV sectional opener on Friday at Piqua’s Garbry Gymnasium.

“We’ve just got to keep getting better. You never know from game-to-game because we’ve been inconsistent at times,” Fort Loramie coach Corey Britton said. “We’ve got to figure out the consistency. …We’ve definitely got to get better because Riverside’s got some guys that can put it on the floor.

Though the Redskins have had tournament success the last three seasons, they have only three letterwinners back from last year. They’re currently without one in senior guard Nick Brandewie, who is dealing with a nagging minor injury and rested on the bench on Friday.

Their other two returning letterwinners helped lead the squad against Covington. Senior guard Eli Rosengarten scored all 15 of his points in the first half while senior forward Nathan Raterman scored nine.

“We needed those guys to step up,” Britton said. “Eli’s been playing really well lately. It’s always good to have some guys that have been here and done that before. We need all the experience we can get. It’s always a learning process, and hopefully we’re better in game two.”

Covington, which was the No. 11 seed, finishes 5-18 overall. The Buccaneers’ defensive pressure seemed to slow Fort Loramie in the first quarter, which allowed them to stay in the game. But after senior guard Chad Yohey hit a pair of free throws to pull Covington within 12-8 with 24 seconds left in the first, things got lopsided quickly.

Fort Loramie hit four 3-pointers in the second quarter to power a 24-7 scoring advantage and take a 36-15 halftime lead. Covington didn’t pull closer than 18 points in the second half.

“That was a big quarter,” Covington coach Matt Pond said. “It was a massive second quarter, and that’s kind of been our Achilles heel all year, having trouble at spots throughout the game, going through a drought against a good team. You’ve got to be able to match that.”

Eight different Fort Loramie players hit 3s in the game. Rosengarten led the squad with three 3s, two of which came during the team’s big second quarter. The squad finished 11 for 18 unofficially from three-point range.

“The more balance we get, the more options we have and the tougher we are to guard,” Britton said. “For the most part tonight, our 3-point attempts were inside-out. I don’t think we settled much. We shared the basketball, and when we share the basketball, the ball goes in the basket.”

“I can’t take away from any of my kids’ efforts,” Pond said. “My seniors have led us emotionally all year, and you can see that by the way our kids played. We scrapped, we fought against a good-shooting team.”

Fort Loramie scored the first four points of the game but Covington pulled within 6-4 after that. Rosengarten hit a 3 from the left corner to put the Redskins ahead 9-4 with 2:09 left in the first but the Buccaneers finished on a 4-3 run.

“We played better defensively early,” Britton said of the first quarter. “I thought we were extremely passive on the (offensive) end of the floor. We weren’t rebounding the ball well, and if you don’t rebound well, you’re playing defense longer. That’s what they did to us in the first quarter, got a lot of offensive rebounds. Those are definitely areas we need to grow.”

Fort Loramie pulled away in a hurry in the second, though, by starting the quarter with a 14-2 run over the first 4:30.

Nathan Raterman started the run with a pair of free throws and a basket, then after Yohey made two foul shots, Jake Ratermann made a 3. Mescher made a put-back, then Rosengarten hit a 3 and made a putback with 3:36 left to put the Redskins ahead 26-12.

“We knew they could shoot it, and that was a tough matchup athletically for us,” Pond said. “I liked our kids’ effort and I liked the way we took care of the ball against their pressure. …(Fort Loramie is) well-coached and they played hard and played together, and that takes nothing away from our kids.”