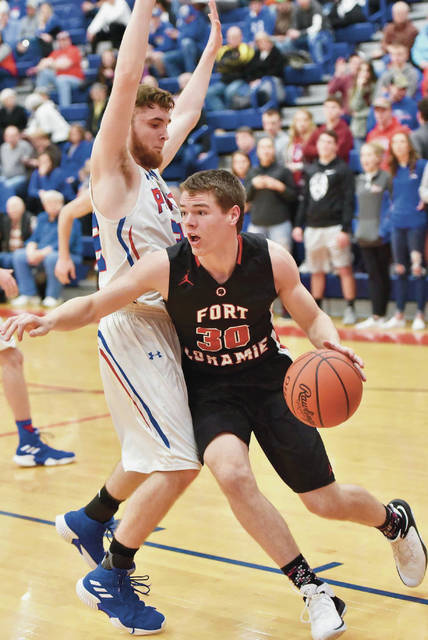 Article and Picture from the Sidney Daily News–Bryant Billing

Fort Loramie drastically improved its shooting from the first half to the second half, which helped turn a close score into a blowout by the end of Tuesday’s second D-IV sectional semifinal.

“We missed a bunch of cheap ones in the first half,” Fort Loramie coach Corey Britton said. “I think our (assistant) coaches had us for seven missed layups in the first half. But give Riverside a lot of credit. They finished well around the rim and hit shots early.”

“I think it’s huge,” Britton said of the balanced scoring. “It takes the load off of our better shooters when everybody gets going early, getting everybody on the same page offensively and getting the movement going.”

Brandewie, a junior guard, also had three rebounds and two assists in what was his first game in two weeks.

“He’s ‘Mr. Consistent’ for us,” Britton said of Brandewie, who’s one of three returning letterwinners off last season’s regional runner-up squad. “He’s been through the fire. …He brings that experience and sometimes that calming effect on our team.

“Just to have him back out there is huge. He’s a little rusty and his conditioning isn’t quite there, but we’ll keep working on him the next few days, and hopefully he’ll be even better Friday.”

Fort Loramie will try to earn a fourth consecutive district final appearance on Friday against Ansonia. Britton said the Tigers’ performance against Botkins was impressive.

“We’ve seen maybe two or three zone defenses all year long,” Britton said. “They were really good tonight and beat a really good Botkins team, which beat us (once).

“We’ve got to be ready to go on Friday, or our season’s going to be done.”

Kyle Knight led Riverside with nine points. The Pirates finished 13 for 38 (34.2 percent) from the field and were outrebounded 34-26 for the game.

Willoby was a first team all-Northwest Central Conference selection this year after averaging 13.6 points and 8.8 rebounds per game.