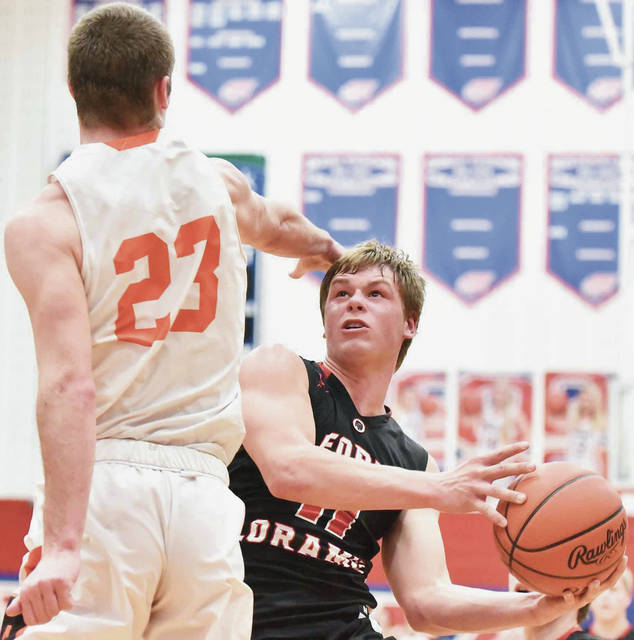 Story and Picture from Bryant Billing and the Sidney Daily News

The Redskins clinched their fourth consecutive district final berth with a 33-23 victory over Ansonia in a Division IV sectional final at Piqua’s Garbry Gymnasium Friday. It caps off an undefeated stretch at the gym for the team’s seniors in sectional games the last four years.

“Going 12-0 in Piqua, that’s almost unheard of,” Fort Loramie coach Corey Britton said. “To come here and get out of this sectional four years in a row is incredible. All the credit in the world to those guys.”

Ansonia trimmed a 16-point deficit down to five late in the game, but Fort Loramie scored the last five points to pull away.

Fort Loramie (18-7) advances to face the Miami Valley Christian Academy vs. Cincinnati Christian winner in a Div. IV district final on Friday at UD Arena. The Redskins — which have advanced to the district finals six out of the last seven seasons — won district titles in 2017 and last year.

Another sectional title looked like it would be a tough task early in the season after Fort Loramie started 3-4. But the Redskins finished strong in regular season by winning six of their last eight, which Rosengarten attributed to the growth of the team’s underclassmen.

“Pretty awesome to win this last one,” Rosengarten said. “… I’ve been playing varsity since I was a sophomore and a lot of these guys don’t have much experience. I’ve just been trying to lead as much as I can.

“… Being a senior, I’m just glad I get to go to UD one last time, and I’m glad our younger guys can get that experience. That way, they’ll have experience for next year and the year after that.”

Other than that, the rest of the team is new to varsity.

“I don’t think at the beginning of the year there was a whole lot of belief in our basketball team,” Britton said. “Our seniors get all the credit in the world.”

“He’s a dead-eye shooter, and we started Eli on him to make sure he didn’t get going,” Britton said of Buckingham. “(Rosengarten) did a good job. …I thought we really set the tone with our defense.”

Fort Loramie led 17-7 at halftime after only scoring three points in the final seven minutes of the first half. The offensive stagnation didn’t extend past halftime, though.

Jake Ratermann opened the third quarter with a basket, then Rosengarten hit a 3 with 6:03 left to push the lead to 22-7. After Matthew Shook hit a basket for Ansonia, Mescher scored a layup with four minutes left to increase the lead to 24-9.

Ansonia made it interesting in the final minutes, though.

The Tigers responded with a 5-1 run, which Hunter Muir capped off with a basket with 7:25 left in the fourth to cut the lead to 25-14. The squad then started the fourth with a big run.

Fort Loramie didn’t let it get any closer.

“We’re just fighters,” Rosengarten said. “We play hard, and we share the ball.”

Nick Brandewie finished with six points and Raterman added five. Shook led Ansonia with 13 while Muir, who hit a game-winner against Botkins on Tuesday, scored six.

Fort Loramie took control by scoring the first nine points. Brandewie opened the scoring with a basket with 5:24 left, then Mason Kemper completed a three-point play with 4:51 left. Raterman scored 30 seconds later, then Brandewie scored with four minutes left to cap off the run.

Ansonia pulled within 12-5 by the end of the first quarter, but Brandewie scored the first basket of the second quarter to push the lead back to nine. Neither team shot much the rest of the half as both struggled against each other’s defense.

“We knew we needed to get off to a good start against them,” Britton said. “We’ve been saying all week that they like to play in the 30’s and 40’s. We wanted to make sure we dictated the tempo tonight, and getting off to that huge start allowed our kids to get settled in. That was huge for us.”

MVCA and Cincinnati Christian will play in a sectional final on Saturday at Taylor High School, which is far west of Cincinnati and close to Indiana.

“We’ll be there and (make the drive) happily,” Britton said. “We’re excited (for districts), no doubt about it.”

Ansonia, the sectional’s No. 5 seed, finishes 14-11 overall. It’s the second consecutive year the team has lost to Fort Loramie in a sectional final. The Redskins won 47-24 last year.

The Tigers will lose four seniors to graduation, including Muir, who was a first team all-Southwest district selection.