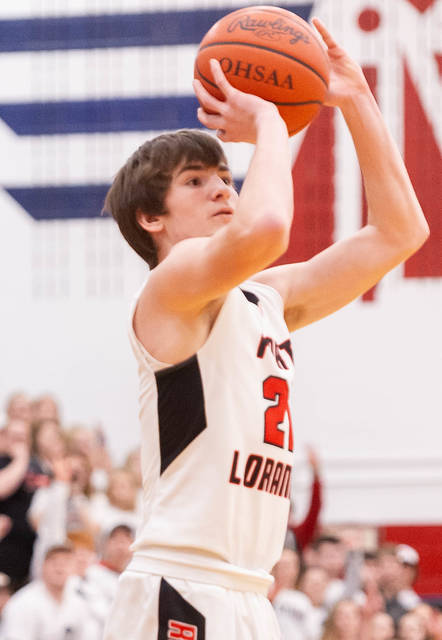 PIQUA — Fort Loramie junior guard Nolan Berning is looking forward to a change of pace next week when the Redskins play in a district final at Vandalia-Butler’s Student Activities Center.

It’ll be about the only new experience of the tournament so far for Fort Loramie — not that Berning or anyone else on the team is complaining.

The Redskins kept their five-year undefeated streak at Piqua’s Garbry Gymnasium going on Friday with a 49-35 victory over Shelby County Athletic League rival Botkins in a Division IV district semifinal.

It’s the fifth consecutive year Fort Loramie has advanced to a district final.

“Fort Loramie basketball I feel is really consistent,” Berning said. “I’m not trying to brag, but getting out of here the last five years is cool. It feels really good to get out of here with a win.”

Berning and Caeleb Meyer each scored 13 points as the Redskins (17-7) used a combination of tough defensive pressure and hot shooting to win a rubber match with the Trojans. The teams split in SCAL play in regular season, with each winning on their home court.

“They were tremendous on that end of the floor, and we hit shots early, and that made it easy on us.”

Due to normal district finals host UD Arena housing the Atlantic 10 women’s tournament next week, the games will be played at different sites across southwest Ohio. All D-IV finals will be played Friday in Vandalia’s 4,000-seat gym.

Regional games will be played at UD Arena later in March, so Fort Loramie will have a chance to play there.

The Redskins will need to win their district final first, though. The squad will face either Hamilton New Miami or Ripley Union-Lewis on Friday at 5:30 p.m. in Vandalia.

New Miami (19-5) is the higher seed in the Cincinnati Div. IV sectional, and Britton said the squad is favored to win its district semifinal against Union-Lewis. The semifinal is on Saturday at Taylor High School.

“I’ve seen them once, and they won by 50,” Britton said of New Miami. “I don’t know what we’re up against yet. I do know they have three 1,000-point scorers that are juniors. They’re going to score the basketball, so we’ll be up against it defensively.”

Britton said Fort Loramie is playing its best right now. The Redskins dropped to 10-5 after losing to Jackson Center on Jan. 28 but have won seven of nine since.

“We’ve come a long way over the course of the year,” Britton said. “It’s not always the prettiest thing in the world, but our kids are grinders and they’re fighters. To get out of here for five straight years is a true testament to our program.”

Botkins finishes 18-7 overall. The squad will lose one senior to graduation in Elliott Goubeaux, who has been injured the last half of the season.

The rest of the team is slated to return, including all-SCAL selections Jayden Priddy-Powell and Jacob Pleiman.

“We bring back our core group, but in the Shelby County League, you can bring back everybody, but if you don’t spend the time in the offseason working out, it doesn’t matter who you bring back, because everyone reloads.

“… We’re going to spend our time in the weight room getting better and stronger.”

The Redskins led 30-17 at halftime. Botkins junior guard Priddy-Powell hit the first basket of the first quarter to cut the gap to 10 points, then Tyler Free made a pair of free throws midway through the quarter to bring Botkins within 35-25.

Grant Albers completed a three-point play with 2:14 left, then Berning made a basket with 35 seconds left to boost the lead to 40-25.

Pleiman made a put-back at the buzzer to bring Botkins within 13 points, but it never came closer in the fourth. Devin Ratermann, who finished with six points, hit a key 3 midway through the fourth that pushed the lead to 16 points.

“The balance is really nice to have,” Britton said. “Sometimes it’s a worst nightmare because you don’t know where (the scoring) is going to come from but to know you’ve got seven or eight guys you can put it in the basket nice. Devin Ratermann probably only played about 10 minutes tonight but made two monster 3s. Having those kids that can stretch the floor and shoot it is nice going forward.”

Fort Loramie scored the first five points of the game and continued to build its lead through the second quarter.

Meyer hit consecutive 3-pointers from the right wing midway through the first to push the Redskins’ lead to 11-4, then Berning made a 3 with 3:20 left to push the lead to 14-4.

“They came out and I think they went 4 for 4 on the first set of 3s they shot,” Powell said. “In a game like this when the emotions are so high and they get the crowd behind them, it’s a tough, uphill battle for a bunch of underclassmen to fight back.”

Caleb Mescher made a basket with 10 seconds left to push the advantage to 20-9 heading into the second, then Meyer opened the quarter with a 3 to increase the lead to 23-9.

“Anytime you see the ball go in the bucket early in the tournament, you sort of see everybody take a deep breath,” Britton said. “We knew we were going to defend at a high level but we knew we had to score points. They’re about as explosive as anyone we’ve played.

“… The credit goes to our boys. Holy moly, we played well tonight.”

Priddy-Powell made two late 3-pointers to bring Botkins within 28-17 but Grant Albers made a basket with two seconds left to boost the lead to 13 points at halftime.